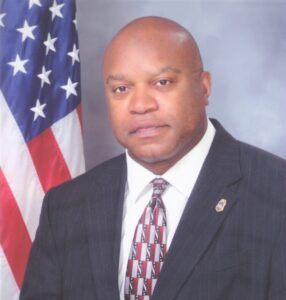 Shenandoah Titus, Esq., is the Founder and Chief Counsel of WARN. One of America’s principal authorities on whistleblower law, anti-bullying and police accountability, Attorney Titus served in leadership positions within municipal, state and federal government for over 21 years. He provides legal counsel within the higher education community, and promotes workplace ethics as well as ethical policing in America. He is a member of the National Native American Bar Association. His ethnic background is Native American (Cheyenne) and African American.

Shenandoah began his federal career as Senior Policy Advisor for the Transportation Security Administration (TSA) Headquarters, one of the largest components of the U.S. Department of Homeland Security (DHS). Afterwards, he made DHS history as the first Program Manager for the Headquarters Anti-Harassment Unit, which he established in 2012. He received the DHS Secretary’s Award for Excellence, regarded as the Department’s most prestigious award.

Himself a whistleblower, Shenandoah resigned from DHS on April 13, 2018 and founded WARN on Independence Day, July 4, 2018. He prevailed in his whistleblower retaliation and harassment legal action against DHS, reaching an honorable settlement on July 27, 2018.

Shenandoah is a Berkeley Law scholar, where he is completing the Master of Laws (LLM) degree. He earned his Bachelor of Science and Master of Professional Studies degrees in Human Ecology at Cornell University, where he received various honors, including being named to the Dean’s List and selected as an Outstanding Senior. He completed a Master of Liberal Arts degree with a concentration in Government from Harvard University, Division of Continuing Education within the Faculty of Arts and Sciences. He earned his Juris Doctor at Western New England University School of Law. Shenandoah completed a two-semester, on campus executive certificate program at Harvard Law School.

Attorney Titus is licensed to practice law by the District of Columbia Court of Appeals Bar. He is a national consultant, advocate, speaker and author of three books. His most recent book by Outskirts Press is titled: The Whistleblower: Defeating Bullies, Harassers & Management Gang Retaliation (available on Amazon). For more information, please visit our services page herein.